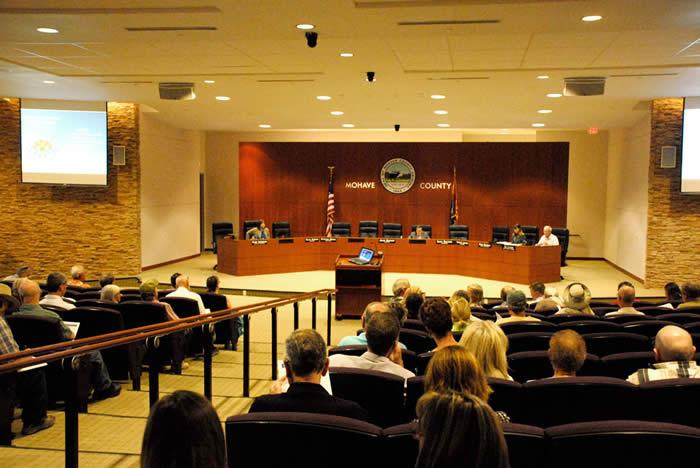 Frustrated residents of the Northwest Basins Planning Area told Arizona Department of Water Resources staff at a late-June meeting in Kingman that something needs to change fast about plummeting underground water tables in some of the area’s aquifers.

They just don’t know, as yet, what that something is.

ADWR Director Tom Buschatzke along with planning and hydrology personnel traveled to Kingman on June 29 to conduct a forum on local water issues.

The mission to the state’s “Northwest Basins Planning Area” is the third set of public sessions that Water Resources has organized in accordance with Gov. Doug Ducey’s Arizona Water Initiative, an effort to accurately assess water conditions in 22 distinct planning areas around the state.

Conditions in the Northwest Basins region – an area including Kingman – bear great similarity to those in areas that ADWR has previously researched, the Cochise Planning Area in southeastern Arizona and the West Basins Planning Area in the Salome-Wenden area.

All three of the largely rural areas examined so far are exempt from the state’s 1980 Groundwater Management Code’s groundwater requirements. In all three areas, water users are heavily – in some areas, exclusively – reliant on groundwater. In certain sectors, all three regions are seeing decreases in aquifer water tables, although data collected from about 50 percent of the wells tested in the Northwest Basins area actually showed minor water-level rises. And all three also are seeing substantial, recent increases in industrial-scale dairy cattle and farming operations.

Those developments, exacerbated by persistent drought, brought out dozens of Mohave County residents to the June 29 public hearing at the county supervisors’ auditorium. The event included an assessment of Northwest Basins Planning Area groundwater conditions by Water Resources Chief Hydrologist Frank Corkhill, as well as an opportunity for residents to express their concerns to the agency’s director and his department’s planning staff. 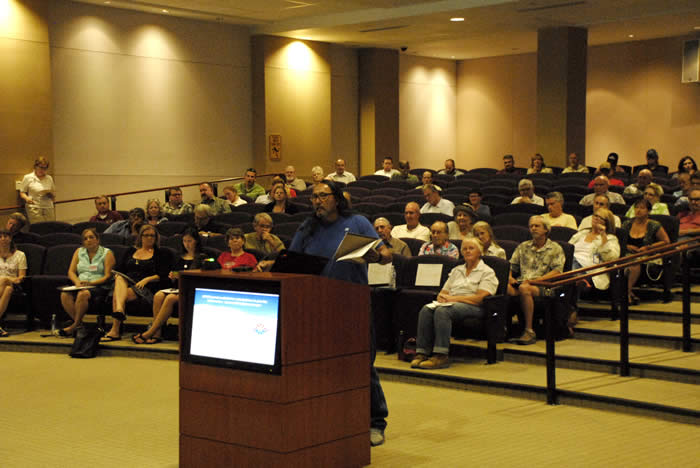 Water level changes in most areas were relatively small, said Corkhill, averaging about a fifth of a foot annually in areas that saw water levels drop. The Water Resources department collected data from 47 wells in the Northwest Basin Planning Area between 2006 and 2015.

The most dramatic decreases, he said, were logged in the more heavily populated areas around Kingman, Golden Valley and Meadview. Those regions saw decreases of one to three feet each year.

Corkhill noted that most of the large-scale farming operations in the region are new, many of them less than two years old. That makes it difficult, he said, to draw a direct line between aquifer depletion and farming.

The chief hydrologist did present evidence of a downward spike in the water table in an area that has seen substantial farming growth.

A well in the Red Lake area of the Hualapai Valley is showing a decline of about nine feet in just the last several years, he said. That is likely evidence of agricultural pumping in that area, he said.

Corkhill observed that it is almost a certainty that more wells will be showing the effects of agricultural pumping in the future.

The Northwest Basins Planning Area is outside the reach of the groundwater regulatory standards that are required in active-management areas, or AMAs, as they are known. The Phoenix and Tucson metropolitan areas, for example, are within AMAs. 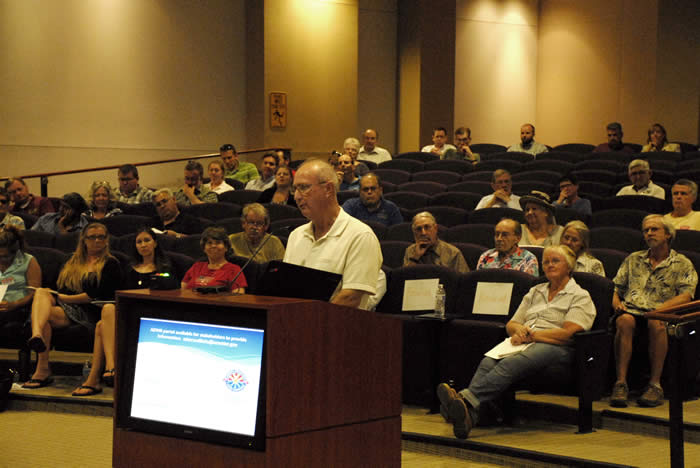 Several Kingman-area residents expressed concern that AMAs – or, for that matter, the less-regulated irrigation non-expansion areas, or “INAs” – would not effectively help resolve the area’s water issues.

Just what regulatory scheme might help stabilize the groundwater-depletion issues, however, remains a puzzle.

“We have all these regulations, but the one thing essential to sustaining life is the one thing we don’t regulate,” said resident Nichole Cohen.

A landowner must file a notice of intent to drill a well and must use a licensed well-driller. Beyond that, the Groundwater Management Act affords Water Resources staff with few regulatory tools.

“ADWR’s authority is limited in this area,” said Walker. “There are no reporting requirements.”

Northwest Basins residents seemed split on how to address the declining water tables.

Denise Bensusan said “ADWR is going to have to come into our community and create an immediate AMA.”

The less-restrictive INA, she said, “is not enough.”

The hearing attracted nearly 120 residents, including many public officials.

One of them, state Rep. Regina Cobb, R-District 5, described herself as neither “an AMA or INA person.”

“I want to have a third option,” she said.

AN ADWR WEBINAR: A GAVEL TO GAVEL RECORDING OF THE JUNE 29 PUBLIC MEETING ON WATER AT THE COUNTY SUPERVISORS' AUDITORIUM IN KINGMAN