It is a cool, breezy-to-windy morning as Paul Ivanich departs west from Phoenix toward the vast “Ranegras Plain” and the hundreds of water wells dotting its sun-parched landscape.

Ivanich and other Water Resources hydrologists and field staff are conducting a “basin sweep,” measuring and analyzing the groundwater levels in wells located in exotic and remote sectors of the Ranegras Plain. Areas known to Water Resources planners by names like “Utting.” And “East of Utting.”

Their efforts will provide baseline data about the current state of the region’s underground aquifers, information crucial to a wide swath of individuals and institutions, from the water users themselves to municipal, county, state and federal researchers and water planners to academics studying issues like the impact of drought on the state of Arizona’s water supplies.

The data, too, will become part of Gov. Doug Ducey’s Arizona Water Initiative, a statewide effort to identify water supplies and plan for long-term water sustainability, a top priority of the Department of Water Resources itself.

Overall, the first “track” of the governor’s two-track initiative (the second track is identifying strategies to augment supplies of the state’s liquid gold) involves analyzing groundwater levels in Arizona’s 22 “planning areas,” including the area known as the “West Basins” region. The Renegras Plain constitutes a major portion of the West Basins.

With its water-users almost entirely reliant on groundwater, the West Basins is one of the top priorities for Water Resources hydrologists. Which is why on this cool, breezy March morning, Ivanich’s white Ford work truck is headed west from Phoenix.

For other travelers on Interstate 10, the notion that there actually might be water to be found anywhere in these enormous, arid reaches of west-central Arizona may seem ludicrous. In every direction the landscape is spare. And sun-sapped dry. But underground water is out there, and, even in the current Age of Drought, quite a lot of it, especially under the bottom land of the basin. On this mid-March day, Ivanich will join up for a time with Basic Data Supervisor Rick Herther in search of learning exactly what levels of water remain down below.

"We need to know how much is there, and how much (the water level) is changing - if it's changing," said Ivanich.

Far off the Interstate, in the valleys enveloping hidden, little West Basins communities like Vicksburg, Wenden and Salome are enormous farms and dairy-cattle operations, some of which tend thousands of dairy cattle, and which also grow vast acreages of hay and alfalfa feed stocks for the herds. Nestled amid all that agri-industry are enclaves of retirees and other residents, many of them cool-weather seasonal visitors. 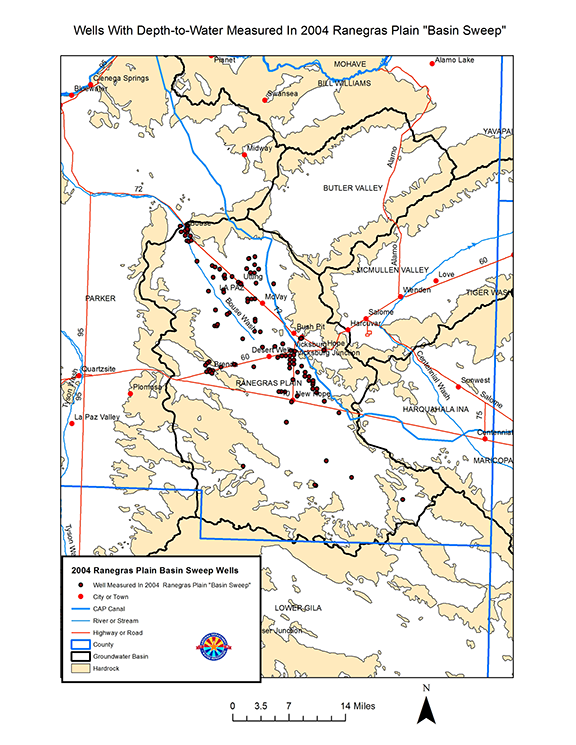 All of them – residents and agribusiness, alike -- have a huge stake in the condition of their region’s underground aquifers. In fact, many of them would express those heartfelt water concerns less than a week later at a community stakeholders meeting organized by Water Resources staff in Wenden:

“In a couple of years we’ll have to be drilling again,” said Rod Mavlin, a homeowner and part-time Wenden resident from Klamath Falls, Ore. Mavlin, as well as other area residents raised concerns at the March 28 meeting about fast-dropping water levels in their wells.

“I’m not a lawyer. I’ve never been in this (drought) situation before,” said Mavlin. “I don’t know what to do.”

Providing accurate data about the condition of the aquifers feeding their wells is one critical step toward figuring out what to do. Which largely is why Ivanich and Herther are braving rutted country roads and dodging free-range cattle in the west-central Arizona desert in order to measure well depth.

Transducers Group Supervisor Paul Ivanich checks the read-out of a transducers sitting atop a well head near Wenden, Ariz., in the Renegras Plain.

It is harsh out here. Snakes, reports Ivanich, really are not much of a challenge for the state’s field-service staff and hydrologists. Stark, open, metal-clad wells are not a snake’s milieu, usually. Spiders weaving cozy homes under the heavy metal lids of the well heads, on the other hand? Now that can be an issue. 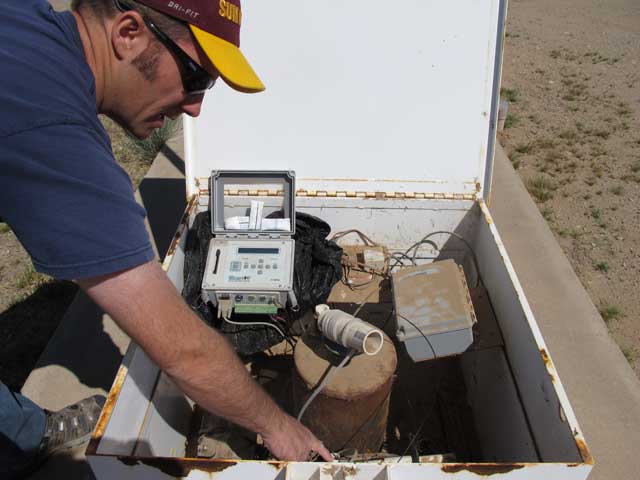 As with most measurement data, accuracy is a function of repetition. The more often you measure for a well’s water level depth, the more you know about the condition of the aquifer down below.

Ivanich’s work unit monitors water-level depths using “pressure transducers,” which are some of the most sophisticated measuring technologies available.

A pressure transducer is an electronic monitoring device installed by ADWR in 129 wells around the state. They measure the water pressure in the well, which is converted to the depth to water in the aquifer at the well site. Ivanich on this day will be reading and electronically logging the transducer results on numerous well heads in the region.

When gauging the depth of water you cannot see, repetition of readings, as noted above, rules. A transducer takes recordings every six hours -- an orders-of-magnitude improvement over traditional hand-held measuring tools – which then are collected on-site by Ivanich and his team.

Some transducers are more sophisticated than others. About 80 of the 129 Water Resources transducers around the state automatically report their data daily via telemetry. They are tied into the Geostationary Satellite Server – aka, “GOES” – operated by the National Oceanic and Atmospheric Administration’s National Geodetic Survey. The GOES-linked transducers provide water-level data daily.

“They’ll broadcast the data and upload to our system in near real time,” said Ivanich.

The hydrologist examines one data logger at a Wenden golf course/RV resort, downloading its data and checking for any damage to the sensitive electronics. Then he checks several located on active local farms. And one or two in places so remote that it is difficult to grasp why anyone ever bothered drilling a well there.

Transducers are far from the only measuring devices used by Water Resources hydrologists. 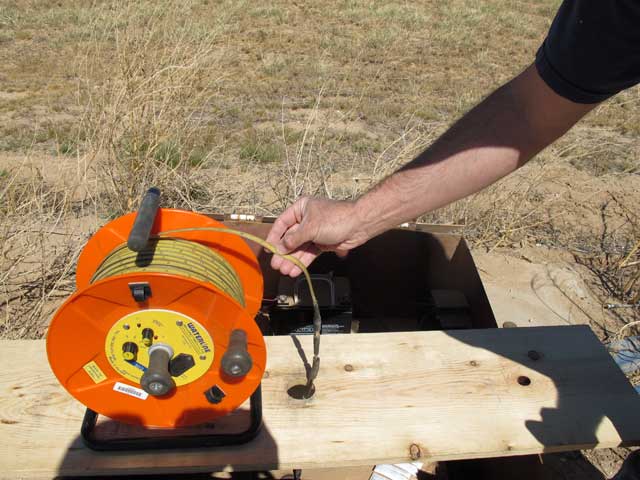 At one well, Ivanich pulls out a lengthy, spooled device that looks like an enormous tape measure with a heavy metal weight at the end. It is an “E-tape,” which registers water depth when its ungrounded probe hits the water. The E-tape typically is a back-up tool to transducers, assuring the complex transducers are calibrated correctly and are making accurate readings.

Later, Ivanich will double-check a transducer with a steel tape that can measure water levels to one one-hundredth of an inch, simply by chalking the tape and lowering it under the front of the tape comes back up with wet water on it.

Hydrologists also employ a tool known as the “bubbler.” The bubbler uses a small compressor to slowly push out air through an attached tube. The amount of pressure necessary to push out the air bubble reveals the current water depth.

And they also still use what may be the most basic hydrology tool in the kit, an electrical sounder, which, like the E-tape, registers a completed electric circuit when the probe hits water.

A marvel of measurement simplicity, the electrical sounder is ideal for wells stuffed with pumps and other equipment that can snag and claim the expensive probes of more exotic devices like rocks in a Montana trout stream.

Basic Data Supervisor Rick Herther is a master of the electrical sounder. 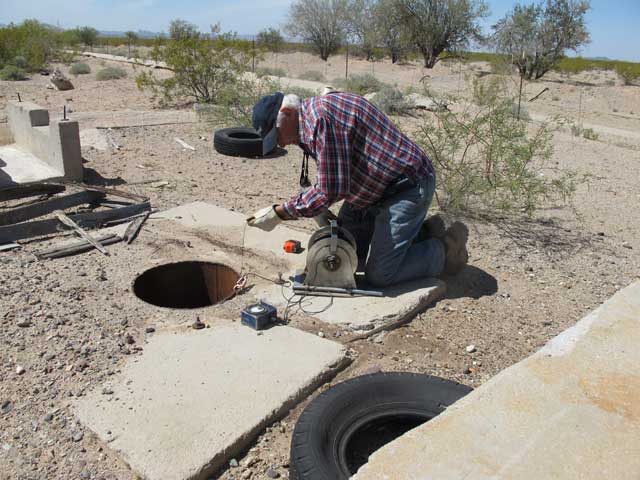 In rapid succession, Herther unreels the sounder tape, fishing-reel style, down into a well three, four times or more to produce an accurate depth record. The entire process takes a matter of minutes. Logging the data into the all-important Index Book takes almost as long as the measuring itself.

Nearly all the West Basins wells Ivanich and Herther check this March day are at lower levels than when last measured. One isolated well, last checked on November 11, 2004, has dropped eight feet in 11 years and four months. Considering how drought has robbed the aquifer of its average natural recharge, not bad, all in all. Some wells on active farmed land, though have gone down 100 feet or more since 2004.

Eventually, all that data becomes a part of the factual record – the vital record crucial to decision makers from state governors and university academics… to anxious landowners in tiny desert villages who need to know how deep their wells will need to be.